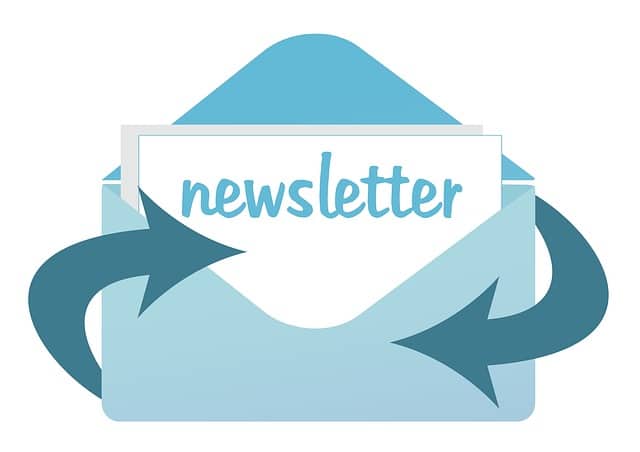 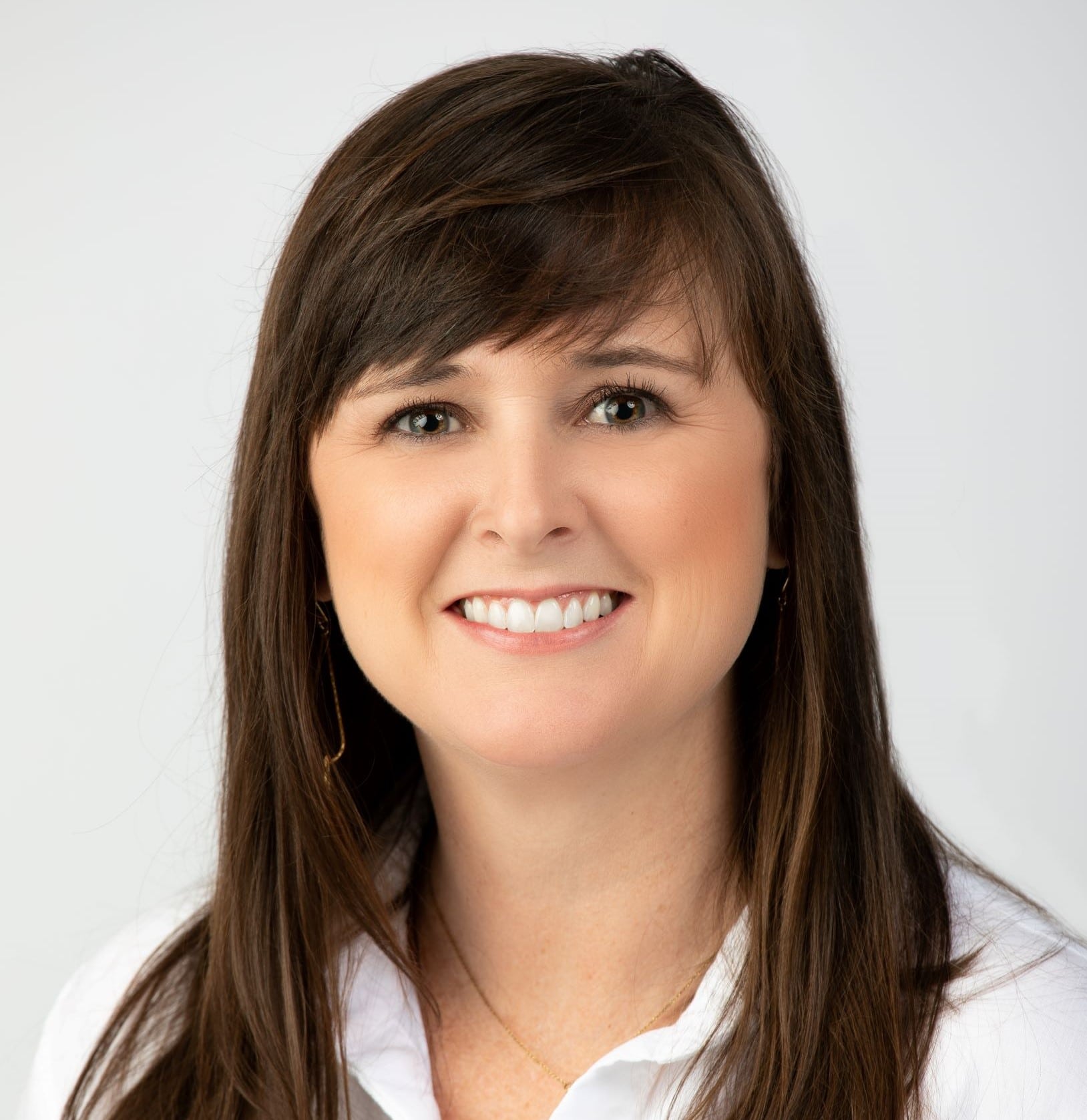 “The stock market is a device to transfer money from the ‘impatient’ to the ‘patient’.”

A word from our Chief Investment Officer, Tom Mallini

For the last twelve months I have been trying to get my mind around the economic impact of the significant monetary and fiscal stimulus injected into the US economy as a result of the pandemic. Let me say outright, that I believe pumping money into the economy was the right thing to do considering the uncertainty created by the need to shut down the economy in an attempt to control the spread of Covid 19. No one knew how long a shut down would last and how Americans would survive potentially significant income reductions for an indeterminate period of time.

Considering that the US and most world economies have significantly reopened, what is the current and future impact of the $9.85 trillion that the government has inserted into the US economy via outright cash payments and quantitative easing? This represents about 43% of our annual GDP. We are certainly seeing heightened inflation and increasing interest rates. Is a recession looming?

Let’s begin by studying how the thinking of “smart” people (FOMC members and economists) has evolved from the Fall of 2020 through today. To do this we can examine the evolution of thinking as set forth in two tools. First, the Quarterly Summary of Economic Projections published by the Federal Reserve Board Federal Open Market Committee and secondly, the Wall Street Journal quarterly survey of approximately 65 economists. The charts below are extracted from the FOMC forecasts of September 16, 2020 and June 15, 2022 as well as the Wall Street Journal surveys of October 2020 and July 2022. This comparison demonstrates just how difficult accurate economic forecasting is considering how economic factors change significantly and rapidly over time.

On September 2020 the FOMC projected core PCE inflation to be 1.8% in 2022 and 2.0% for 2023. Its June 2022 forecast increased inflation expectation to 4.3% for 2022 and 2.7% for 2023. The Federal Reserve has moved from an expectation that inflation would be “transitory” to a realization that it will not be, and that aggressive action is necessary to reduce the rate of inflation to its target of 2%. In other words, it is not going away on its own and it is much higher than previously forecasted. The action it is taking is raising interest and removing quantitative easing. In September 2020 the FOMC forecasted the Federal Funds Rate to be .1% at year end 2022 and 2023. Its June 2022 forecast projects the Fed Funds Rate to be 3.4% in December 2022 and 3.8% in December 2023.

This same pattern is found in the Wall Street Journal’s survey of economists. The July 2022 survey compared to the Fall of 2020 reveals slower expected GDP growth, higher core PCE inflation and higher interest rates. Interestingly though, is the fact that both resources forecast little if any change in the outlook for GDP and inflation in the “long run”. Will an aggressive attack on inflation bring about a recession?  Consistent with the above forecasts the FOMC increased their Fed Funds Rate range to 2.5%-2.75%, 75 basis points at the July meeting. Furthermore, speeches made by Federal Reserve Bank Presidents since that meeting have reaffirmed their commitment to returning the inflation rate to their target of an average of 2.5%.

On August 2, 2022 St. Louis Fed President Bullard said “I think we will probably have to tighten for longer in order to get the evidence that we need to see that inflation is actually turning around on all dimensions and in a convincing way coming lower, not just a tick lower here and there”. Three other Fed Presidents have also said since July’s meeting that the inflation fight is far from over and that more tightening will be necessary. President Bullard has stated that he expects the Fed Funds Rate to be in the range of 3.75% to 4.0% by year end.

The US economy has experienced twelve recessions since 1948. Ten of these recessions were preceded by a period of increasing interest rates by the fed, in an attempt to reduce inflation. The last two recessions, 2007-2009 and February 2020-April 2020 were caused by a global financial crisis and a pandemic respectively.

Is a recession inevitable?

It is reasonable to expect that the US economy may have to undergo a recession to tame inflation. So, let’s look at some data on the last twelve recessions. The most important factors to consider in recessions is their depth and duration. In these twelve, the average decline in GDP is 3.69% and the average duration of recession is 10.3 months. The US economy is very resilient as demonstrated by the depth and duration of the 2020 recession. GDP dropped by 31.4% in the second quarter of 2020 which is greater than the drop during the Great Depression. Then rebounded 34.4% in the third quarter. While recessions are no fun, the last 74 years have shown that they are not devastating to our life.

So, the question of the day, is whether the Fed can resolve inflation by creating a “soft” landing without a recession. If they are successful, they would have beaten some formidable odds. One positive factor the economy has as we enter these challenging times is that consumers have not spent all the stimulus money that the government released during the early days of the pandemic. Economists use a comparison called the “Cumulative Excess Savings”. It compares the actual rate of savings over, a period of time, to the rate historically projected at the beginning of the time period. The cumulative excess savings in the US economy in March 2020 was $.1 Trillion. Today it stands at $2.6 Trillion and economists forecast that only 5% to 10% will be spent by 2023. These excess savings will act as a buffer against the impact of higher prices and higher unemployment that would otherwise be expected to decrease consumer spending which comprises about 70% of the US economy. This could reduce the risk of recession or make a recession less painful.

As we have seen since the Spring of 2020, economic change can happen rapidly, can’t always be predicted and lead to market volatility. However, history tells us that investors that stay invested during all cycles of the economy achieve better returns than those who do not. Consult with your advisor and make sure your portfolio is best allocated to withstand volatility considering your individual circumstances. 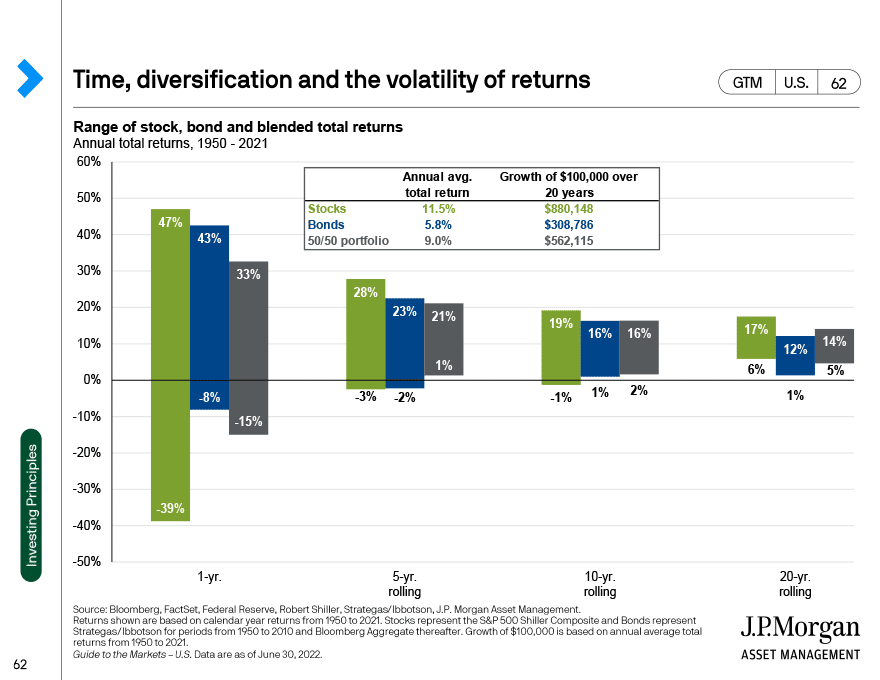 The above chart is provided by our friends at JP Morgan. It shows how the ups and downs stocks and bonds tend to moderate over time. Please notice how significantly the graph changes during every rolling-5 year period. One of our jobs is to help our clients focus on long-term objectives. Thankfully, over time investment returns are more predictable. Our goal is to position your investments to do as well as possible for your risk tolerance, time horizon, and need for income. 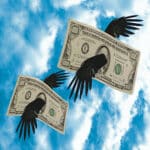 The following article is from our friends at Vanguard. We think it provides a nice summary of the power of a portfolio that has 60% stocks and 40% bonds. 2022 is a year that has seen both stock and bond prices drop at the same time. We’ve been having conversations about this phenomenon with many of our clients this year. The information in this article is compelling, and demonstrates how well this model performs over time, despite the performance we’ve seen this year.
Read the full article from Vanguard here

Don’t invest based on the headlines…
We believe that long term success in investing is best achieved by matching your strategy to your goals, and then sticking with that strategy through the inevitable ups and downs of the markets. We do not believe in timing the market or trying to beat the market. We do believe in helping our clients understand what they are invested in and what to expect from those investments in the short-term and long-term. We value transparency and we help our clients see the potential return, potential volatility, expected income, and annual expense for every holding in their portfolio. 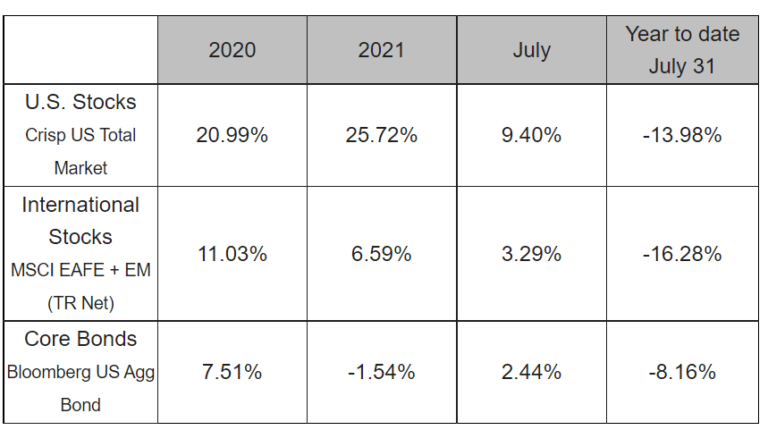 Financial planning is a key to your success
We believe that every person and every family can benefit from having a comprehensive plan in place to help them meet the goals that are  important to them.  No matter your income or net worth, strategic planning can help you improve your decision making and your outcomes.  We believe that life is too short to live unhappily, and our goal in financial planning is to increase happiness. We believe that work should be fun and rewarding, both financially and in a sense of personal accomplishment. Our clients work hard, and we can help them maximize the benefits of their hard work. Helping individuals and families attain financial success is important work, and we are proud to do it.

PrevPreviousWe will save $13,660 on health premiums in 2022 by using the Affordable Care Act Marketplace
NextImportant Changes from Secure Act 2.0 in 2022Next